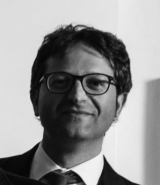 Riccardo Fini is Associate Professor of Entrepreneurship and EU CIG Marie Curie Fellow at the University of Bologna (UNIBO), and Fellow at Imperial College London. He’s serving as Associate Dean for Innovation and Entrepreneurship and Director of the Master in Entrepreneurship andof the Global MBA (Innovation) at the Bologna Business School. Before joining UNIBO, he researched at Ecole des Mines Paris, Case Western Cleveland and University of Bozen. He was also EU IEF Marie Curie Fellow at Imperial College and Assistant Professor at UNIBO. His research has been published in leading entrepreneurship and innovation journals such as Entrepreneurship Theory and Practice and Research Policy. He has contributed to the University of Chicago Handbook on Technology Transfer and the Palgrave Encyclopedia of Strategic Management. He has been awarded €350.000 of research funds and invited to present his research in more than thirty universities, in fifteen countries, throughout Asia, Australia, Europe and North America. His research has been featured in Il Sole24Ore, Nature, Times Higher Education andThe New York Times.